Reviews – or is it a reflection? Pleasantville and Nietzsche

Pleasantville (1998). A classic example of metaphor in art. The standard interpretation of the piece written, produced and directed by Gary Ross is that it was a metaphor of the sixties. America was leaving behind the Father Knows Best and Leave it to Beaver paradigms of the 50s and launching full speed ahead into the sexual revolution and peacenik philosophy of the 60s crowned by such shows as Rowan & Martin’s Laugh-In. Okay, I get that. After all, I was there. It was a time when we transitioned from collectively looking the other way when Marilyn Monroe sang happy birthday to the President (May of 1962) to the cultural “freedom” of opening our homes and our bedrooms, to public view – and criticism. Happy Days and Opie consigned to the archives and re-run channels; enter South Park.

There are also the more personal interpretations. Moments of personal change such as when Betty Parker (the quintessential 50s mom) makes the decision to stop hiding the fact she is now in full Technicolor and refuses to use her grayscale makeup to hide it. Or when Mr. Daniels discovers color as an art form and refuses to give it up, even in the face of town statutes. The struggle to seek personal integrity even in the face of prejudice, conflict, and self-doubt.

Watching the movie for the first time in recent weeks, I saw these interpretations; and much more. To me this film was a kaleidoscope of thought provoking moments that went far beyond the superficial presentation of “sexual freedom” and “civil disobedience.” This was most evident in the change brought about in Jennifer/Mary Sue. The most promiscuous individual in the whole story remains stubbornly grayscale until she finds her real passion, literature. Her conversion takes place as she reads from D. H. Lawrence. An author who was considered controversial in the 50s as he confronted many of the underlying themes in the movie. She becomes so impassioned she remains in the Pleasantville universe to attend college. Or, David/Bud remaining grayscale until he ends up in a fight protecting his “mother” from harassment.  It was not all about free sex, free speech, and open rebellion. It was about finding that thing which filled the individual with enough passion to become the deliberate vehicle of change.

How then does all of that relate to Nietzsche?

Because Nietzsche had this thing about suffering. Grant it, his view was elitist. He was quite certain that suffering only made sense for those already strong and healthy and was little more than a deep abyss for those who were not. On this I disagree. For a moment, let’s paint Pleasantville with a different brush, one from Nietzsche’s studio.

Pleasantville was the perfect place to live. The greatest emergency was a cat stuck in a tree and no one ever showed up late for dinner or work. The basketball team never lost. No one was jealous, felt left out or failed at school. It was, quite frankly, what many of us pray for. Unrelenting peace and serenity, no challenges, losses or regrets. The inhabitants lived in a world so protected that they could not even imagine the thought of “somewhere else.” A condition many practice in real life even if they choose not to admit it. Segue to Nietzsche.

Within a number of Nietzsche’s writings we are introduced to his idea of suffering and what it means in the context of being human. In his view mankind, most particularly those of Christian Europe towards the end of the 19th century, was a mass of sickly worms with visions of greatness, but no capacity to reach it. Though he is saddled with the misnomer of being the father of Nazi philosophy, he would have abhorred the result. In Genealogy of Morals he states, “Do we really need to see in him ‘the spawn of an insane hatred of knowledge, mind and sensuality’ (as someone once argued against me)? A curse on the senses and the mind in one breath of hate?” Although not particularly enamored of the “masses,” he was a man that would have fought against any force that selectively suppressed knowledge, passion, and intellectual freedom on any level.

Shall we return to Pleasantville, the land of the perfect and home of the – uninspired? Nietzsche is not, of course, the first philosopher that reserves the true intellectual advance of mankind to some elite group. It is an all too common point of view. In my research for my manuscript on the book of Job I have found many and will, most likely find more. There is, however, a fundamental truth to his perspective.  Again from Genealogy of Morals, “but suffering itself was not [man’s] problem, but the fact that there was no answer to the question he screamed, ‘Suffering for what?” We are not afraid of suffering, we are afraid there is no reason.

The lesson of Pleasantville as I see it is that we can choose to paint our lives, our world, and our universe, with the grayscale-brush of protected perfection. Resting in the assurance that the mystery of the why and wherefore is not for us to understand, but to endure. Except – well – we live in a Technicolor universe. If we are to be all that we can be as individuals, as a race, as a representative of what the creative power of life itself can accomplish – we have to accept the consequences of passion. We must embrace the reality of the ever-changing relationship between what was, what is and what will be. Suffering is every bit a part of being human. An essential part that makes us the creators we are.

Filed under Humanties for the Unbound Mind, My Bookshelf ~ Current times, My Journey with Job

A few weeks ago I made a journey to the sea. It was a short journey. As I tell my friends, close enough to visit but not near enough I may have to run. Way out here on the far western edge of the Washington peninsula we have the choice of the Pacific shores or the beaches of bays and coves. My new home is less than an hour away from both Ocean Shores and Westport. My visit this time was to Westport.

I chose Westport because, unlike Ocean Shores, I had never been there. I had, of course, hoped that my husband would be with me on this adventure. It was not to be. So for my first visit to the pounding surf I chose a safe route – a new memory.

There were a few hiccups. I no sooner arrived at a lovely sunny and windblown beach than I discovered that the batteries on my camera were about to die. For some reason beyond me, the backups I usually keep in my camera case were not there. Well, wasn’t that lovely. The second issue was that I, well, didn’t seem to be in appropriate footwear. It was tempting to just carry my shoes and stroll barefoot through the sand. I’m not quite ready for that.

I still spent time, watching and listening to the surf. Letting that timeless beat ease some of the pain of being there alone. I always loved the ocean. Whenever I was stressed, unsure, tired, frightened, worried that things in life had just gotten “too big” for me – I escaped. To the shore, or to a mountain, or a vast moonless sky, but always somewhere bigger than me. Somewhere that made “stuff” smaller, more manageable, more doable. This time it was the ocean surf. The heartbeat of the earth. How much closer to nature can you get and still be a separate entity?

I drove into the tiny coastal town of Westport and wandered through the shops, found some batteries, and had lunch at a seafood place. I walked the piers and managed a few pictures. Hesitant, first steps toward being a “me” and not an “us.” All in all, it was a pleasant, though bittersweet day.

This weekend “holiday” from unpacking, rescheduling, house fixing and whatever else is going on in my life, helped me pause and take inventory. There are times when you lose someone who truly was your soul mate that the loss grows into a deep and hungry black hole sucking the life right out of you. But there are also times when that love is so great that it won’t let you quit. Will not let you forget the dreams that can still be lived, or the person you have grown into because of their care. I think I’m learning. I just need to do better at having appropriate footwear, oh, and a few extra batteries. 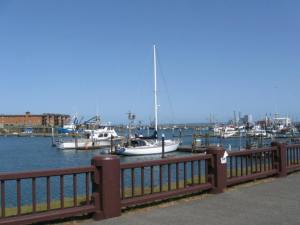