Reviews ~ Discoverer, or Last Guy to the Party?

Columbus Was Last, by Patrick Huyghe, available for $25 on Amazon – there are several alternates as well. The link is to the version I read. 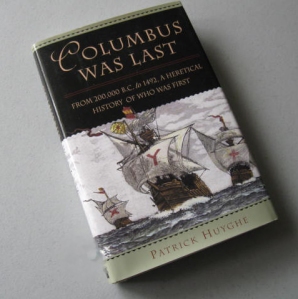 I have a confession. I’ve never been a fan of Columbus. For some reason I could not get all excited about someone who “discovered” the American continents – when there were already a whole lot of people here. I get it. The colonists wanted some pin in history that didn’t draw a direct line to England. Some point in history that said, “This is where it all began.” Except, well, Columbus was far from first; and it was in a photo finish for last.

The story of Columbus is filled with ambiguities. We don’t know for sure where he came from, who he really was, or what his true motives were. We don’t even know for sure where he is buried. His logs are filled with contradictions and he did not receive the riches and notoriety he sought in his own life time. It wasn’t until the nineteenth century that he received general recognition. The “Admiral of the Ocean Sea” was somewhat of a flop in his own time even if he made at least four successful voyages to the “New World.”

That said, questions regarding the settlement, and repeated “discovery” of the Americas, are still suffering from heated debate. The only events of note that appear to be generally accepted in the academic community are the arrival of homo sapiens over a land bridge or sea route from Asia to Alaska (the Bering Strait), and the occasional visitations and settlement attempts by the Nordic peoples.

When the migration to the east occurred, and how often, is a battle ground in the literature. Each year, each decade, each millennia that the date is pushed back is a hard won victory. Although it is now generally accepted (and supported by archeology) that the Vikings arrived in the Americas around 1000 CE, where all of their landings took place and how long these places were occupied seems to be up in the air. Meanwhile, other stories, legends, and evidence, are constantly brewing in a pot of, ‘Who was here first, how often, where and what were they doing?” And that is the kind of mystery I love.

Huygue’s little book is an easy read that leads the curious through the tales, legends, and evidence of previous visitations to the American continents. He collects what we know about the ancient tales and the archeological evidence unearthed in pottery, inscriptions, sculpture and artifacts. He provides sign posts to those who have compared flora and fauna, common language, rituals and dress. He also provides references to those who have analyzed the ancient tales to locate possible routes of travel and settlement. There are also descriptions of carvings throughout South America which depict races not currently accepted as visitors and matches them with corresponding tales and legends from possible, or probable, points of origin.

This was a very busy place. Collectively, there is at least some indication that these lands were visited by the Chinese, the Japanese, the Polynesians, the Irish, the Africans, the Phoenicians, the Romans, the Arabs and the Jews. The book mentions but does not address possible visitations by the Celts and the Greeks. At the time of Columbus, there appears to be a number of records, maps, and sailors’ tales from the Danes, the Portuguese, the British and the Irish. And then there is the Welsh bastard prince, Madoc.

This book is not a fanciful collection of theories. The notes and bibliography support the research and provide a road map to a serious student of the history of this part of the world. Huyghe also provides details when the authenticity of an artifact is questionable. I found the roots of many of the bits and pieces I have found in academic literature and well researched historical fiction.

The journey of Columbus did indeed have a major historical impact on the future of these lands. Even if the original result was slavery, exploitation and disease, I would like to think that at least some of the heirs to these lands have contributed much that was beneficial to the human race. Columbus’ journey, and those of his contemporaries, “stuck” and the whole world learned of, and remembered, the land across the seas.

The point, I think, is that we really can’t approach the world with a sense of absolute. It is arrogance to believe we have it all figured out when we know so little about what has come before. As my poem says, “Is it something that we’ve left behind, Or something that we’ve yet to find? …” Enjoy the magic of the journey. Don’t be swayed by every whimsical interpretation of the bits and pieces we find of the past; but keep an open mind. Who knows what treasures we have yet to find? And just what they might tell us about who we are?