Who I Am Yesterday finds Barnes & Noble, and a lot of new friends

Over the past month, I have been working towards a book signing arranged for me by Greta King, a magical marketing agent. My debut run at this activity was at Barnes and Noble on Black Lake Blvd in Western Olympia, Washington. Since my book is about caregiving and the things one must learn to live with a loved one with dementia, I chose to expand my influence.

I spent some time in the offices of Council on Aging in both Aberdeen and Olympia, and collected a substantial amount of literature about support groups, resources, and organizations. That collection followed me to the signing, and will become a permanent part of any signing or speaking engagement I secure in the future.

In addition, I put together a short resource guide that included several book titles, and links to sources of clothing, medical equipment, and care supplies. That guide is available here. My list of reading material includes the literature provided by the Council on Aging, along with links to acquire additional information. Even if SW Washington is not where you live, the list is broad enough it will provide a starting point to locate support closer to home.

My local newspaper also published a brief article about the event and something about my book.

For this event, Barnes and Noble used my resource list to locate titles within their store that might be of help. These became part of my display. The store management was very gracious and mentioned several times how happy they were to be a part of my mission to inform, to comfort, and to share.

Then, of course, the event. Yes, I sold a few books. The store will continue to stock my book, at least for a while. I also had a chance to talk with people who needed and wanted what I had to offer. One group of ladies had traveled to hear me speak and when they realized I was not speaking, asked for contact information so that they could invite me to speak to their group. They left well supplied with materials, a signed copy of my book, and a few answers I could offer based on my own experience.

Another lady stopped in mid-stride as she came through the door and announced she had just decided she needed a cup of coffee and had no idea why; until she saw my table. Again, after having a cup of coffee and reading through a few things, she left well supplied with information, and a signed copy of my book.

John McBride, from the office of the Lewis-Mason-Thurston Council on Aging, stopped by with his wife to get my autograph on the copy I had left with his office. From what I hear, both his office and Aberdeen may be contacting me about acquiring more copies for their people and to share. There are also hints of a speaking thing or two in the future.

I would say, all in all, the event was a success. I know I thoroughly enjoyed meeting the people that stopped to say hi and talk (or grab a bit of candy). I think I will be a welcome guest at the store in the future, and I have made contacts that may well expand my reach and my ability to share. Not a bad start; not bad at all.

Choose to Dance – find the way that clearly defines your needs as a caregiver, and the needs of the person being cared for – and dance to your own tune. 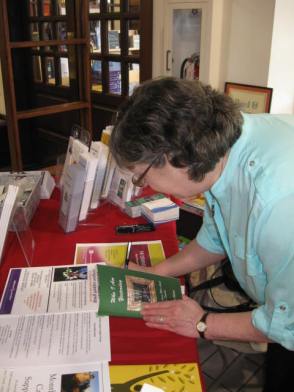 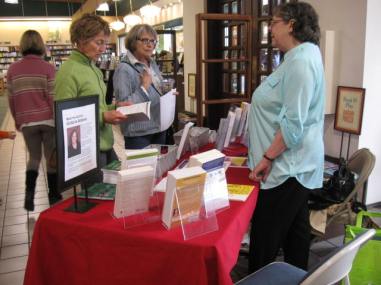 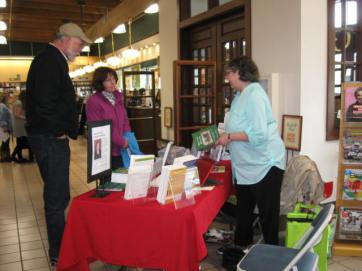 Tagged as Barnes & Noble, book signings, caregiving, dementia, speaking, Who I Am Yesterday

Reflections ~ All the way home

This past April has been a monster roller-coaster ride in my life. A ride that was, at times, rather unsettling in the deep, dark corners of my bi-polar brain. I have cried, I have danced, I have laughed, and somehow made it through to a quiet moment before I begin a new chapter in my life.

Two years ago, in April, I moved forward with plans to purchase a home in Aberdeen. With my beloved gone, I made the move without him. One weekend was spent getting my office/library painted and carpeted. The following week, two trucks pulled into the driveway with the detritus of two lives lived in books and research. I still have a bit more to sort, but I have made substantial progress.

During the past two years, I have fallen in love with my home, the town, and the people I have met. Except that I wasn’t all the way home just yet. Me and my various adventures were scattered half way across the continent and all the way into Canada. My dream was to work and sleep in the same time zone; to center my life in the community I had chosen as my “forever home.”

The past two years have not been easy. Trying to adjust budgets, keep things moving along with commitments I had made, and dealing with an “uncomfortable” exchange rate — but, I managed to keep my boat afloat. Last fall, I decided to make the move to take on hours after 5 and on weekends. With a bit of an adjustment to my resume, I was able to secure work as a cashier on some nights and weekends; and, when the time came, I locked on to some hours with a local tax service. For a number of months, I was working up to three jobs at a time (plus all those extracurricular activities). I never left my desk during office hours with my day job (other than for job interviews and doctor things), but I also had to ensure that whatever was necessary to meet deadlines was worked into my expanded work schedule. I’m an accountant – deadlines are part of my DNA.

This exercise was something I chose to do for more than a bit more financial security – it got me back out in public, face to face with real people. While, for the most part, communication with my co-workers in Canada was very good, it is oh so much easier when you are fully present and engaged. It also yanked me out of my fast-hardening shell and revived my need to learn how to learn again. It has always been my belief that you “fill the job you are in,” doing your best at what is required without making yourself a pain about what you should or could be doing. I found the whole experience rather invigorating, even while it could get exhausting. As it happens, it was a chance meeting at one of those moonlighting spots that may have helped secure the path to my new adventure.

I have been searching for a position with varying levels of intensity and hope since I arrived here in Aberdeen. My direct supervisor at Strategic knew of my search, and was supportive in every way as I stumbled through a process I had not engaged in for many years. Although I found a number of positions that were of interest, and a few I am told I missed by a hairsbreadth, somehow I couldn’t find that right combination of me needing the job as much as the job needed me.

One day in February, my neighbor (as he was prone to do) knocked on my door with a job ad he thought I might be interested in. Thoroughly intrigued I applied — and heard nothing. Then, after a particularly stressful day, I drug myself to my cashier job and bumped into one of the staff who worked in the agency where I had applied. She was delighted to meet me and announced to anyone that was near that she would love to have me as her boss. You have to laugh, considering I was standing behind a cash register.

I kept in touch a couple of times, emailing the HR department with a note that I was still interested in the position, and I managed to get another interview or two. One interviewer with the State called me and told me how close I had come to getting a job I had applied for in Olympia, and she offered to provide some advice. Feedback! Of course, I’d like feedback! I feel that this, too, was a contributing factor in making my presentation more polished, more specific to the position.

In mid-April, I received a call for a “meet and greet” with the staff as a preliminary to an interview with the council. It was on Good Friday (a Canadian holiday) and I was clear from trying to fit it in to my duties at “my day job.” The whole staff was there, from the interim director to the maintenance crew. I found an incredible group of folks dedicated to their jobs, their culture, and their agency…and coveted the position even more. Early the next week, I received the call for an interview that Wednesday. My day was brightened as I received calls and emails from everywhere as my friends, clients, and business connections reported hearing from a very nice lady seeking recommendations.

I am told the interview with the council went well; however, the deciding factor by the hiring committee was the support I was receiving from the interim director and the staff. That support was evident in the welcoming email I received from the president of the council after I accepted the offer. I have arrived fully home. I am the new Executive Director of the Quinault Housing Authority. I am dancing on air.

I am terribly sad to leave Strategic Group; they have been an amazing company to work for the past nine years. While in-country, my supervisors kept me engaged with new challenges, and moved me to wherever I could contribute the most. When it became necessary for me to focus on caregiving, they supported me in-country with a program that allowed me to work from home part of the day – and, when I moved us back to the States, they kept me on as a remote, contract employee. They waited patiently (at least as far as I could tell) as I searched for a local position. They are a company with a compassionate heart and it shows in the support they give to every community they touch.

Threaded into the bits and pieces of a transition from a long-held position to a demanding and rewarding new spot, my computer blew up (one hour after I received the offer of employment). That caused all kinds of snap decisions to keep me functional as I completed open projects for Strategic before my previously scheduled vacation began. I also had to keep an eye forward to make sure I was prepared to step into the new position. My transition became an international negotiation as the end date in Canada was synchronized with the Tribal start date. My poor night job was caught in the gears and it took a bit of dancing to cover the two weeks’ notice I felt obliged to offer.

Then, not the least of my adventures, there was a book signing. An event I will describe elsewhere, but certainly another landmark in my writing career. I had been preparing for the event for a month, but suddenly things were re-prioritized to handle this major change. It’s a good thing I’m well practiced at handling multiple jobs, eh?

Now, I must go about the business of adjusting my schedule to a whole new world. Although the new position may be a demanding master that ignores the limits of an 8-5 job (not exactly something new), I am certain I will find a new rhythm of life that includes writing, management of a few “extracurricular” activities, and caring for my home. Besides, how could I possibly turn down a commute through Pacific Northwest forests and along the coastline of the Pacific Ocean?