The God Box ~ Part the First 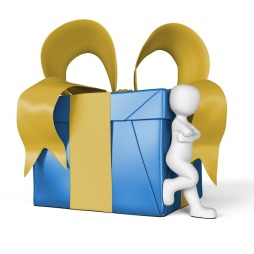 Have you ever received a present that was wrapped up in ever larger boxes? Each time you unwrapped a box there was a smaller box inside until you finally reached the tiny, probably very precious, or very expensive, gift in the middle? That is how my spiritual journey unfolded. My perception of what God should be was the tiny, precious gift I thought lived in the smallest box. I struggled to set Him free, especially from the institutional constraints imposed on Him. It took me a long time to learn that the best box is no box at all.

I was raised in two opposite, and sometimes conflicting worlds. In one world, my family attended an evangelical church three times a week. The denomination was hierarchical, and authority rested with the church leaders. They were supposed to know how to interpret scripture as it applied to every facet of our lives. I attended the church school for a few years and became further indoctrinated into the “delivered word.” This was the church of my father’s youth.

In the other world, my mother taught me to read at an early age. My questions were answered with, “Go look it up.” “Think about it.” “Learn what we know for sure and why.” “Know when opinion is appropriate and useful.” My mother was a saboteur of religious conformity if ever there was one. She had been raised in an entirely different atmosphere than my father was.

I didn’t bother myself too much with the contradictions between what I was taught in church and what was evident to me in my own world. I believed these older, wiser people knew something I did not, and that I must read more; think more. By my mid-teens, all that reading and thinking began to make a substantial impact. In my world, those adults lost their firm grip on the “delivered word.”

At the age of 16, as a voting member of the congregation, I formally resigned from the church. The move was initiated by a squabble over the alleged behavior of our pastor. To this day, I have no idea what was true and what was not. What bothered me was that much of what was said about the man from behind the pulpit of our church was pure fabrication. I knew the sons and daughters of these leaders, and I knew what was going on in their homes. Throughout the debacle I would often watch the sons of these so-called leaders break down in tears and leave the sanctuary. How dare these so-called leaders use the pulpit to create the illusion of holiness, on a foundation of lies, while they massacred the reputation of another person?

My two-page resignation letter stated that I did not believe I knew it all, and that I was painfully aware of how much I still had to learn. I had, however, lost faith in the leadership of that church to show me the way. It was a letter that gained infamy. When my parents asked the new pastor for advice regarding a trip I wanted to take a few years later, the letter was used to defame me. Both of my parents rejected the assault on my morals, and ethics, and told me to do what I felt was right for me.

There was no going back after that. I was off on an adventure that would lead me through several Christian denominations in search of those who, like me, were less certain of the details but still firmly rooted in their faith.

Throughout my journey I have never lost faith. Faith is a quiet, warm campfire deep in my soul that lights the night around me, and occasionally retreats into glowing embers so I can see the brilliance of the night sky above. It has been my guide, my own personal Philosopher’s Stone.

Although blatant hypocrisy played a role in my initial decision to become a seeker, it was not the driving force. For me, the number-one problem with the faith of my youth was that God, as described within that faith, did not fit with my perception of the universe around me. In my opinion, the God of that faith was little more than a cosmic Santa Claus.

Join me, over the next few weeks, as I take you on my journey. It is a journey that may resemble yours, or maybe not. It is, however, a journey that might give you thought. At least I sincerely hope so. Just what kind of God do you believe in?

Filed under Humanties for the Unbound Mind, My Journey with Job, Personal Journeys

6 responses to “The God Box ~ Part the First”