Rings. Symbols of promised love, a symbol of taste or status, a gift. A gift that can turn ugly with little or no warning. I tell this story because it is something easily missed in the rush to care for someone suffering from some form of dementia. One more hazard in life’s ever more restrictive path. 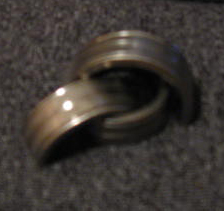 When my husband and I got married, we decided to do something a bit different. We selected titanium rings. This is an extremely hard metal that does not yield to much in this world. Just about the only way to do much more than scar it is to use a diamond blade. We loved the cool, gray metal, the uniqueness, and the idea of endurance.

There was a bit of a problem. His ring finger was sort of in between things. He lost the ring twice (and found it again) and we even purchased a replacement (only to find the lost one). We were told that to have a smaller one on his hand would risk not being able to remove it over his knuckle. Well, he solved that and wore the ring on his middle finger – for years. Until a couple weeks ago.

One morning as he reached for my hand he jerked back and seemed pained. On closer inspection I realized that I had missed a gout episode in the making. It was his ring finger, and it was already quite swollen and warm. Knowing the strength of the metal and the impossibility of removing it if things got worse – off to urgent care we went.

They did take us in immediately. It was obvious there was an issue. And they tried. Squishing, squeezing, the thread trick (I don’t think they did that one right), the ring cutters (even the electric ones) and nothing. It was only getting tighter. My poor husband was in pain and the ring was going nowhere. Someone got the bright idea to call orthopedics.

Some 30-40 minutes later (while I kept hand up and cold pack on the finger) here came the bone doctor with the one thing I knew we needed; a diamond bladed saw. It was really quite an operation. I held a couple of supports under the ring to protect the finger as best I could, the doctor sawed, and a nurse ran a saline drip to keep things as cool as possible. The doctor passed out eye protection against sparks and spray. And we cut. Twice. We couldn’t force the thing open with only one side cut. When the ring came off my poor husband had a second degree burn. The metal had heated up even though we did our best to avoid it. Interesting that the only time he took his hand away is when we stuck it in a bucket of ice. With all the ignominies he had suffered that morning, ice water was one step too far.

There was a point while we were waiting for the orthopedic fellow that someone was floating the idea of visiting the jeweler. Really? Do YOU know a jeweler that would take the liability of taking in some poor bloke with dementia, saw off his ring leaving a 2nd degree burn, all the while hoping the wife had the right whatevers at home to care for it? Um, maybe somewhere the lawyer count is lower but not in my neck of the woods.

The moral, of course, it to be a bit more watchful of those who can no longer understand or communicate when they see a problem coming. In years gone by, any hint of gout and the ring would have been off until things were back to normal.

Be wary the midnight strangler. Put jewelry safely away. If it is missed find a flexible substitute. It really is a near thing that we lost a ring, and not a finger.

My visit to the Health eBrain Study

Well, this time my poking around really got me into things. I had written Meryl Comer, author of Slow Dancing with a Stranger, because I was so touched by her experience. She just happens to be a very reachable kind of lady and full of passion for her focus; mental health. During our chat she asked if I would share the press release for the Health eBrain Study around noon EDT, September 29, 2014. And I did. Everywhere I could think of. I also went one step further – I took the test. 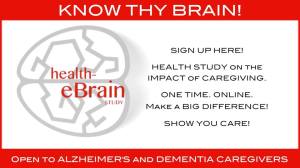 It’s a simple test that really doesn’t take all that long to do. You do provide some demographic information, mainly so that the researchers can compare apples with apples, sort of. It is NOT an IQ test. It tests your response time, the ability to remember a sequence (both forwards and backwards) and your ability to assess changing information based on some really simple parameters. Your score is provided at the end of each section and you are allowed to practice – how many times I’m don’t really know. If you do decide to take the test, I suggest you close everything else on your computer (yes, even Facebook) so that you can focus and do your best. It also helps the response time on some of your answers. My mouse got stuck in a couple of places and caused me to register a few errors. Which is okay; you aren’t competing for a scholarship or a vacation or anything, but it is a nice thing to provide the most accurate information you can.

So what is all the fuss about? Let me quote from the press release.

Changes in cognitive efficiency are closely linked and can occur with depression, fatigue, stress, and long-term chronic illness. This impact is particularly severe for caregivers of individuals with complex chronic conditions like Alzheimer’s and other dementias, two-thirds of whom are women. The physical, mental and emotional burden over time can take as much as ten years off a family caregiver’s life. It also can increase the caregiver’s own risk for dementia. [The numbers Meryl gave me are 6-1].

“Over fifteen million unpaid individuals provide care to the 5.4 million victims with Alzheimer’s or other dementias. [Just to point out the math, that is less than 3 individuals per patient which means that most of us are working far more than one 8-hour shift, seven days a week, 52 weeks a year.] We form the backbone of all unpaid long-term care in the U. S. What happens to our loved ones if something happens to us?” (Meryl Comer, a 17-year veteran of caregiving and President of the Geoffrey Beene Foundation Alzheimer’s Initiative.)

I really urge caregivers to take this opportunity to contribute to serious research about the impact of caregiving. It can give us much needed tools to mitigate or defer the impacts of a mind on holiday.

I have attached the press release for the study. The list of supporters for the program read like a who’s who in the world of caregiving and dementia. You will also find links to the video and to the survey itself. Again, no money is required – just a few minutes of your time to increase the pool of information that researchers need so desperately to find ways to help the caregiving community and those they care for.

What it is all about: https://www.youtube.com/watch?v=7dD3ROvJvbo&index=1&list=PLETJvf11XiB_EmzOS44Py8YCRC4VzHLOr